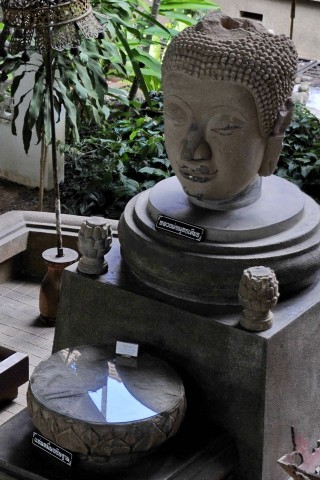 The Museum, opened in 1995 covers exhibits from dinosaur fossils through the Neolithic period, medieval times and up to a display of fish and fishing techniques on the lake plus information on famous local historical personages.

The collection also includes a wealth of Buddha images and inscriptions from the 13th centuries onwards and was originally created by a former abbot of Wat Sri Khom Kham next door. The displays are laid out on two floors and most have English language explanations.

Interesting rather than fascinating, unless you have a particular passion for freshwater fish and/or Chiang Saen period Buddha images but combined with the two wats, Sri Khom Kham and Pra That Chom Thong this makes for a worthwhile trip. We did also suggest timing our around the take tour, so you could take in the museum and wats on your way back into town.

To reach the centre, walk north out of town along the lake for about 10 minutes and you’ll find the Cultural Centre on your left.